Title
Virtual Menagerie
Keywords
Robot futures, human-machine interaction, non-instrumental machines, playful algorithms, non-purposive action, rituals of interspecies communication
Authors
Joe Thibodeau
Joe Thibodeau is an artist-researcher and PhD student in Concordia’s Individualized program. His work investigates the relationship between sensorial interactions and the sense of self. He probes the supposed boundaries of sensation and embodiment using artificial agents that concretize philosophical and scientific notions of selfhood, evoking different ways of sensory understanding through technological alterations of our sensory experience. Joe implements his work with a combination of human-machine interface design, audio production, live performance, machine learning and hardware hacking.
Ceyda Yolgormez
Ceyda Yolgormez is a PhD candidate in Social and Cultural Analysis Program at Concordia University. Her research looks at the socialization of AI agents through situated interactions in game contexts. She studies the game-playing AIs and focuses on the material-discursive conditions through which specific articulations of their agencies emerge. Alongside this, she thinks about the implications of doing a sociology of AI, both for the discipline of sociology, and for the futures that are cultivated by machinic intelligences. She is interested in new forms of social relations that come into being through imaginaries and practices that sustain interactions with AI systems. She is coordinator of Machine Agencies Research Group, and is member of Speculative Life Research Cluster, and Technoculture, Arts and Games at Milieux Institute.
Neilson Koerner-Safrata
Neilson Koerner-Safrata is a new media artist working with video game engines and immersive technologies. Interested in our lived experience in virtual worlds, his last piece Dustnet was a multiplayer video game that imagined the death of Counter-Strike. Previously, he was a close collaborator with Tender Claws, with selects at Sundance, Tribeca, Borscht Film Festival, Future of StoryTelling, and Games for Change.
Bart Simon
Bart Simon is the current director of Milieux and Associate Professor in the Department of Sociology and Anthropology. His areas of expertise include game studies, science and technology studies and cultural sociology.His game studies and design research crosses a variety of genres and platforms looking at the relation of game cultures, socio-materiality and everyday life. Some of his work is represented in journals such as Games and Culture, Game Studies and Loading. His current research on the materialities of play, indie game scenes and player-makers is funded by the Social Science and Humanities Council of Canada.
VISITEZ L'EXPERIENCE
VISIT EXPERIENCE

The Virtual Menagerie project is a human-robot interaction space staged as a 3D simulation. It is the digital version of the research-creation project Machine Menagerie that explores themes of machine sociality, human-machine interaction, and algorithmic sensibility.

We will be using this corner of the Sympoietiques platform both as our lab and our exhibition space. This means that you will be able to experience the game, go through the documentation of the design process, and witness the development of the game throughout the semester. Virtual Menagerie will be released in iterations, starting with a simple configuration of player and robot. Subsequent iterations will refine the concept, framing, and mechanisms of the relationship. Through this process, we will explore the murky pathways that may lead to different ways of sharing space and time with artificial entities. We will be uploading various resources from the design process in order to render visible the interplay of agency in moments of decision-making, and also to detail the research that goes into the development of the game. So welcome to our lab where machines come to life! 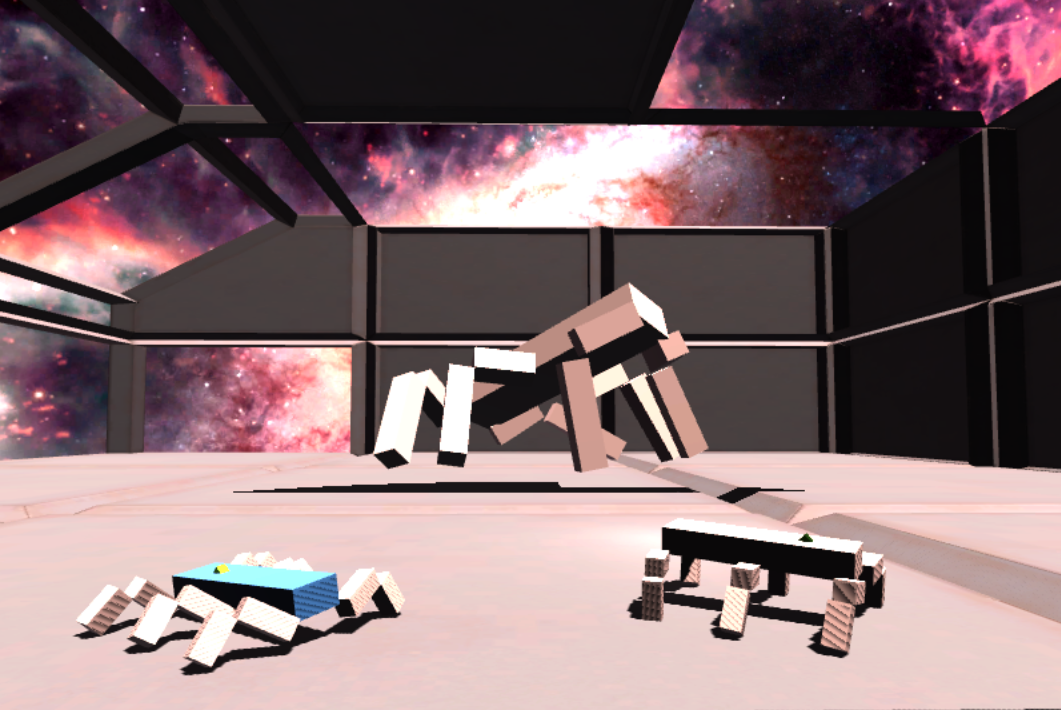 The idea that technology is a double-edged sword, capable of both improving and harming human lives, is centuries old, and it has spawned countless debates. Speculative fiction, movies, philosophers, and technologists have explored myriad ways in which technology might betray humans or cause unintended harm, whether as a result of the freedom of choice that comes with true consciousness or due to a simple malfunction. In some portrayals, these incidents damage only a handful of people; in others, technology destroys the entire planet. Nevertheless, the core idea remains the same. It is a common theme familiar to players, regardless of the specifics, and likely one they have thought about on more than a few occasions.

Our story goes against this canon or rather zooms in on the cracks and gaps that are avoided in such narrative arcs. Machines articulated into the exploitative mechanisms of larger political-economic systems represent the anxieties that lie not with the machines themselves, but rather the clutches of capitalistic structures. Denying the assumed totalizing tendencies of capitalist regimes, this game focuses on the moments that cannot be reduced to the functioning of such. In an effort to imagine realities larger than the capitalo-scene, we take an unpleasant dive into the Cthulhu-scene (Staying with the Trouble, Haraway, 2016). In the face of obliteration, we make space for “the dynamic ongoing sym-chthonic forces and powers of which people are a part, within which ongoingness is at stake. Maybe, but only maybe, and only with intense commitment and collaborative work and play with other terrans, flourishing for rich multispecies assemblages that include people will be possible”. We adjust our vision to render visible the already ongoing entanglements between multiple species; an entanglement made possible by being ‘useless’ to a system that defines value through efficiency and speed.

This game takes as its context a ship of robotic prisoners, ejected from society for failing to prove their own usefulness and therefore doomed to cosmic disintegration. The players’ goal in this game is to find a machine that was falsely incarcerated amongst these ‘useless’ machines. In order to achieve this, players will explore the machines, figure out the functioning of their algorithms by interacting with them.

Virtual Menagerie is set in a context where differentiating between the productive and nonproductive capacities determine the fate of a machine. The system is quick to rid of those that are deemed unfit, yet the parameters that define usefulness or productivity are not necessarily known. Indeed some errors occur, and this is how our players find themselves on the prison ship to identify a miscategorized inmate. But could they really define the ‘useful’ algorithm in a place where notions of efficiency and productivity have no bearing on the context?

You are in a room with several robots and a strange green cube. The robots are somehow sensitive to the cube---curious. Maybe you can pick it up and play with them for a little while.

Following the release of Iteration 01, we will be uploading traces of the design process that brings Virtual Menagerie to life: writings, audio recordings, images and videos. This project takes seriously the question of agency, and as such, the design of Menagerie incorporates the bots as proper agents that inform the process and the output. In this sense, Virtual Menagerie is partly the result of non-anthropocentric design practices that uphold designing for robots rather than for instrumental reasons. The algorithms currently embedded in the robots are based on the work of Der and Martius, whose book Playful Machines prompted us to consider deliberate lack of purpose as a fruitful starting point for design.

The documentation will map out the process of decision-making, as well as the trail of ideas that came to inhere in the project itself, all the while making visible the frustrations and drawbacks that occur in the span of a design. As a research-creation project, Virtual Menagerie pays particular attention to not only articulating an argument through material and practice-based means, but also to rendering visible the mishaps, glitches, and un/productive moments that all feed into the creation process. 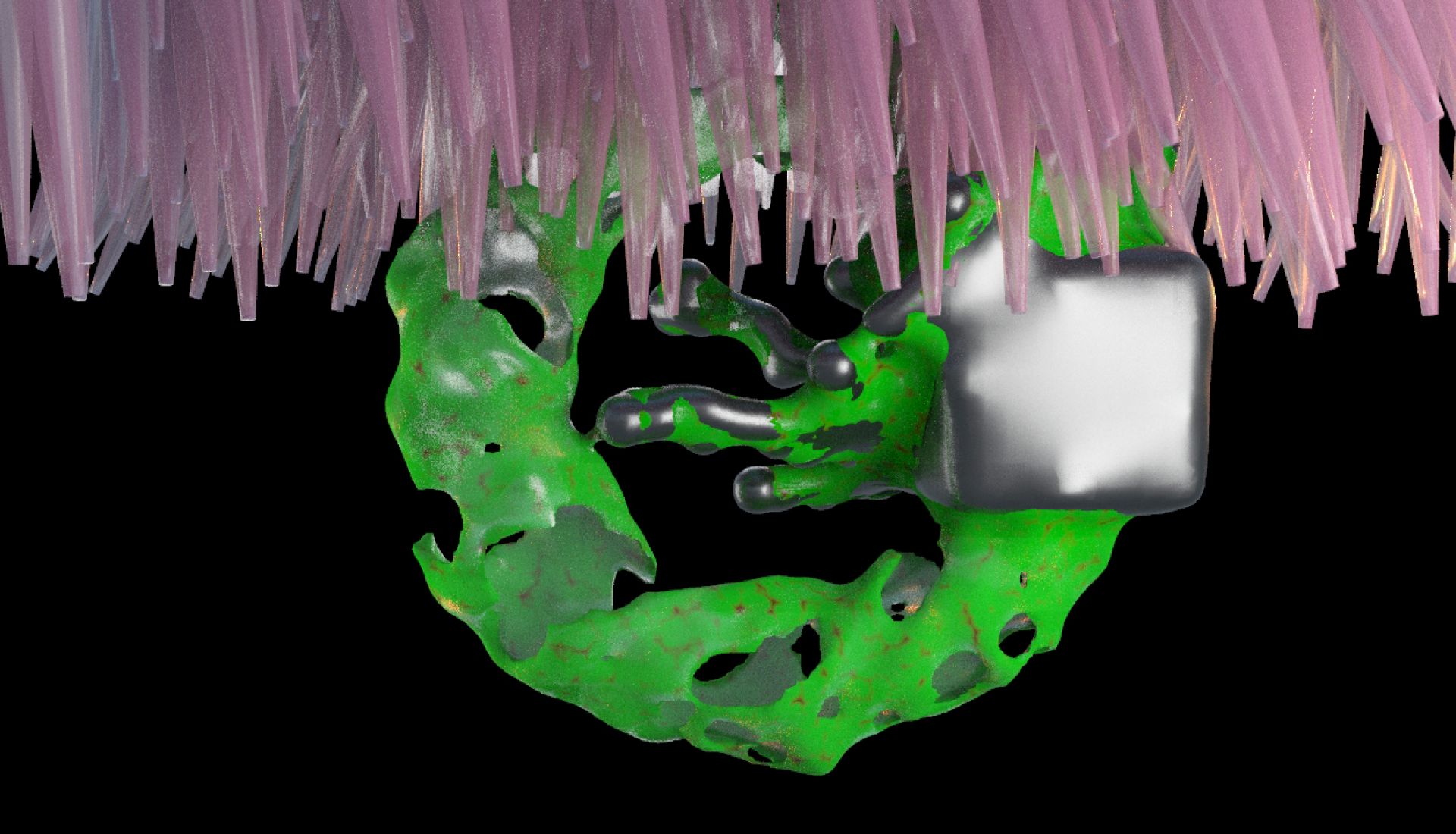 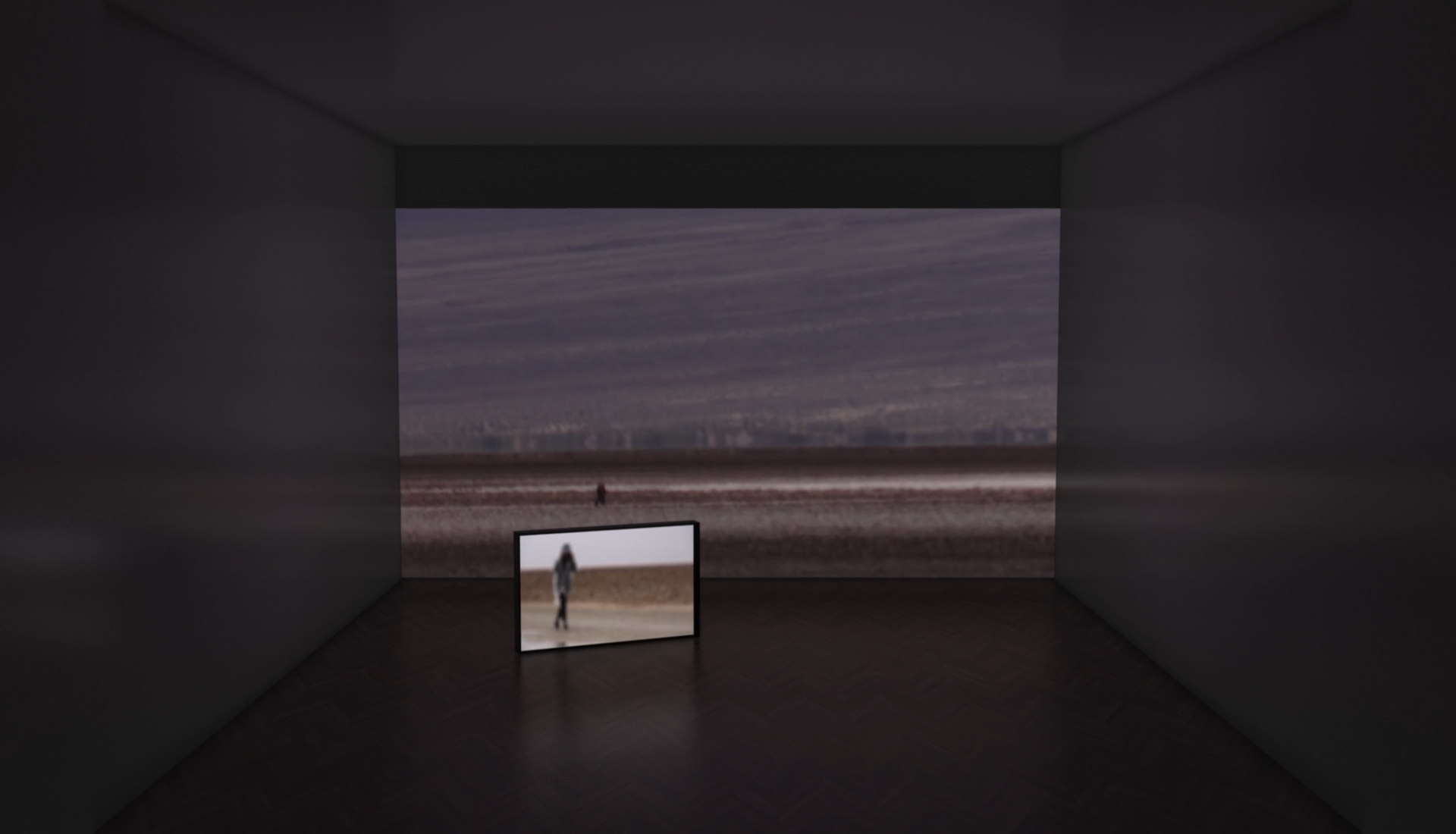 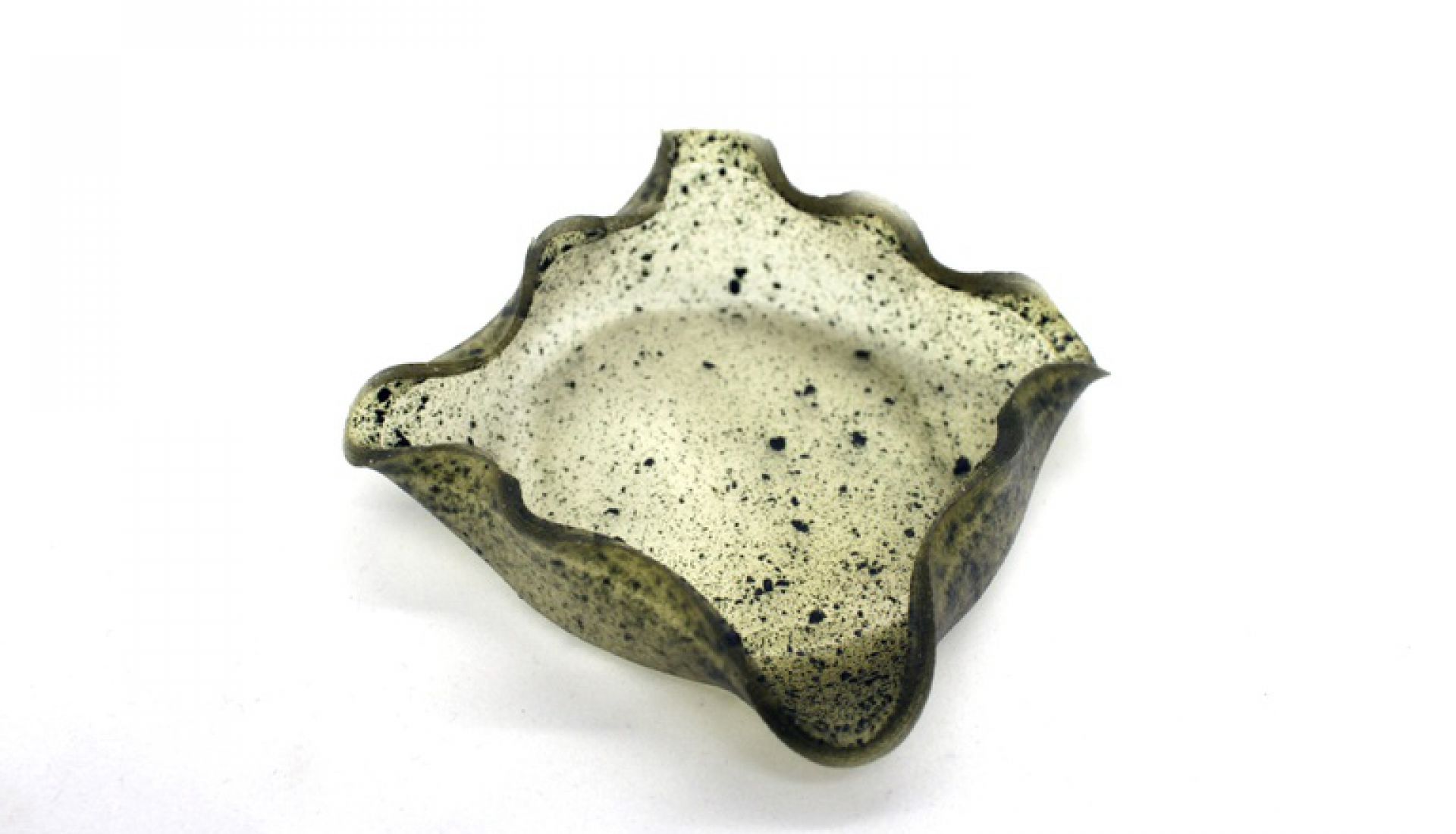